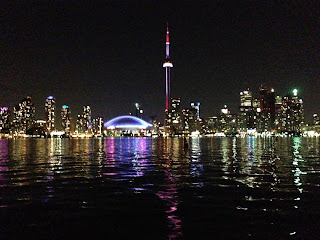 Verse 4.23: The work of a man who is unattached to the modes of material nature and who is fully situated in transcendental knowledge merges entirely into transcendence.

~Before I start this post, I have to preface it by saying that Toronto will always have a special place in my heart because of the great bhakti yogis who live there. For that reason, it will always be one of my homes.~

In the summer of 2005 I moved to Toronto to start my Masters. A month after starting school and getting settled in, I travelled back to Ottawa to apply for a scholarship. I'll never forget that ride. I could literally feel the waves of stress leaving my body. It was a profound experience that gave me a glimpse into the mode of material nature known as "passion".

For many in Toronto, the constant flurry of activity may be something that goes unnoticed. I say this because I know from first hand experience! It was only that first time driving back home that I realized how stressed out I was and how affected I was by living in Toronto. Just that once. I never experienced it again. It didn't mean that I wasn't stressed out, it just meant I had lost my sensitivity to recognizing how it influenced my behaviour.

I bring this up because we've all had experiences of this in our lives. We've all consciously (or unconsciously!) adapted to various people, places, things and circumstances.

Adapting is one thing, but imbibing the consciousness or influence that is associated with something should be done with great caution.

For example, when I first moved, I felt that Toronto was always "on" and instinctively tuned into that frequency. In fact, for the next three years it was a oddity if I slept before 1am! I wish I could say it was because I was proactively doing something substantial, but most often it wasn't! It just became a bad habit.

I became "attached" to the atmosphere of activity and sense of busyness. When I took time out to study in India for four months in a small village, I struggled at first to let that attachment go. I realized that everything has its place. At times we require the energy to get things done, but just staying in that state is not only exhausting but can lead to anxiety (at least for me).

It's something that's worth considering. What are the things that influence us to feel and act in certain ways? If we find that we are happy, positive and feeling strengthened in our journey of self-discovery, keep doing it! If however, our introspection leads us to uncovering that we're feeling less than satisfied, it may be time to find some new positive influences in our lives.
Posted by Unknown at 9/10/2013 09:07:00 PM