mood of a student 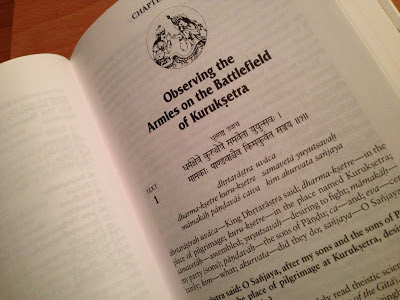 This verse holds a very special place in my heart because it once taught me how essential it is to approach the Gita in the mood of a student.

I had just moved to Toronto to begin my Masters and I was full of trepidation. I had spent a year and a half studying in a bhakti infused atmosphere in Radhadesh, Belgium and had capped it off by touring Europe for the summer going from festival to festival with friends.

I wasn't sure if I could maintain the level of enthusiasm and determination I had imbibed for bhakti in a city atmosphere. I was pleasantly surprised however to learn that a bhakti yogi was going to be giving classes on the Gita at the Toronto Temple the very week after I had settled in.

As I sat there in the class with my Gita opened to Chapter 1, text 1, my ego got the better of me. I knew that despite the fact I had just completed reading the Gita in depth, my learning was just beginning. However, I didn't necessarily think I was going to learn anything new from Chapter 1, text 1.

My skepticism and ego was crushed in mere moments. Ever hear of the expression, "Come out swinging hard"? Well that's exactly what this bhakti yogi did. After reading the sanskrit and english translation of the text:

Dhṛtarāṣṭra said: O Sañjaya, after my sons and the sons of Pāṇḍu assembled in the place of pilgrimage at Kurukṣetra, desiring to fight, what did they do?

He said the following words which entered my heart never to leave again: "Just from this first verse we can see that Dhrtarastra is breaking etiquette. How? Because he first states "my sons" and only then speaks of the sons of Pandu. One who is following etiquette will always put others above their own personal interests first."

And that was it. The instant I realized I was put in my place very soundly. I hand't even opened my mouth and yet I was taught two lessons that day. One, the Gita should be read and understood under the guidance of one who is without motivated interpretation and steeped in devotion. And second, I will always learn something new about every single verse everytime I study it.
Posted by Unknown at 12/23/2012 06:40:00 PM