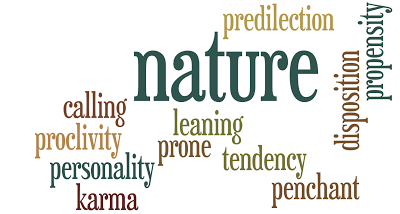 Verse 1.42: By the evil deeds of those who destroy the family tradition and thus give rise to unwanted children, all kinds of community projects and family welfare activities are devastated.

This verse alludes to a concept that is very near and dear to my own heart and that is the concept of nature. In order for a community, and on a much larger scale, society as a whole to function, individuals need to feel rightly situated.

Now rightly situated may mean a lot of different things to various people. It may mean money, fame, power, situation, prestige etc... But I believe if you strip all of those externals away, at least materially speaking, rightly situated means knowing your nature.

This concept will be further explored in the Gita but I'd love to introduce it here. Growing up, I never really knew "what I wanted to be." Anyone else ever feel that way? I would always be in awe (and slightly envious) of those kids who would say with great conviction that they were going to be doctors, business folk or engineers.

I personally took the Science route in University just because my highest marks were in Biology and Chemistry when I graduated high school. I just figured that's what I was meant to be doing. It was only later on, in my study of the Gita actually, that I realized the answer I was searching for lay in its pages.

The Gita speaks of two things that help determine our psychophysical nature. One is our inherent tendencies and proclivities and the other is our karma. None of this: "Just because my dad is a professor I need to be one too," business. Although environment can play a role and being in a household where a parent is professor can influence a child to go that route, it doesn't necessarily seal the deal that professorhood is the path for that child.

Now here's the catch, you would think that having this knowledge would make things easier, but in actuality it can still be quite challenging. Why do I say that? Because people have forgotten to look inside themselves to figure out what they are really good at and how they really want to contribute. See, working with one's nature, as the Gita promotes, means to contribute to society and eventually purify oneself in the path of bhakti yoga.

There's a lot more that can be said about this subject, and believe me, I'll definitely keep writing more about it. But I leave you with this question today. What do you think is your nature?
Posted by Unknown at 1/27/2013 07:34:00 PM