if you don't know where you're going... 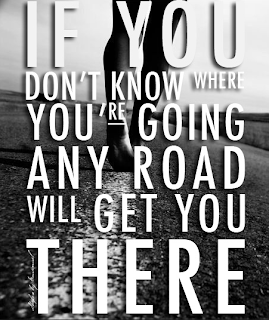 Verse 2.42-43: Men of small knowledge are very much attached to the flowery words of the Vedas, which recommend various fruitive activities for elevation to heavenly planets, resultant good birth, power, and so forth. Being desirous of sense gratification and opulent life, they say that there is nothing more than this.

Not only is goal setting important, but in any practice or activity we perform, it's just as important to know what the top-most achievable goal actually is. Take for example school. I don't know about you, but one of the reasons why I found University so challenging was largely due to the fact that I didn't have an end goal in mind. I only had an intermediate goal which was to graduate with a degree in Biochemistry, hoping that somehow in the process I would figure out what I would want to do.

I chose to major in Biochemistry mainly because those were the subjects that I got the highest marks in in high school. When I entered first year University and my grades took a nose-dive, I remember feeling so stressed out. Not only did I realize that I had to learn how to learn, but I felt that the majority of the courses I had to take were uninteresting and useless. As second year and third year rolled around, I learned how to teach myself, but still felt unsatisfied. For years I didn't understand why. It's only know that I understand it's because all that knowledge and information was just that - knowledge and information. I couldn't put it into context of a larger picture of how and when I was going to apply it. Because of that University was more about grades as opposed to understanding the application of the subjects I was studying.

Here, Krsna is saying something very similar about the process of yoga. He's saying, "Don't just get attached to the external results of what yoga can give you that will simply help to gratify your senses. Understand that there is a higher purpose, a higher goal and strive towards that." Just like I was short-sighted in simply striving for a degree, here the student of yoga is being advised to see beyond the short-term benefits of what yoga has to offer.

So what is the top-most goal one can achieve in practicing yoga? Bhakti. The ability to truly tap into our loving propensity by realizing who we are (the soul) and reviving our eternal and increasingly joyful relationship with the Supreme. Now practically speaking, that may seem a little bit difficult to conceptualize for one who just wants to apply principles of yoga in their life or is just starting their yoga practice, but that's ok. The point is that everyone should be aware that there is an ultimate goal in yoga.

In the meantime, go on and set your intermediary goals. Whether that goal is to simply make it to your yoga class on a weekly basis, to engage in mantra meditation daily or to offer everything you do in a spirit of gratitude, that's wonderful. We all need to take the first step. But from time to time, check and in and see where you're at. That highest goal is only achievable if you know where you're going. Otherwise, if don't know where you're going, as the saying goes, any road will take you there.