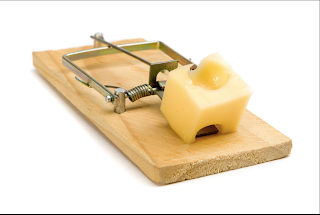 Yesterday, we started breaking down the attachment trap. The trap lures one in by "oh so innocently" encouraging one to contemplate an object of the senses which quickly leads to attachment, lust and anger. Today, we'll pick where up we left off and talk about what may come after one experiences anger.

Breakdown of the attachment trap continued

Step 5 - delusion: Think about the last time you were angry. Starting off on a slow simmer it may have escalated and began burning. You could feel it taking over your body. How did you react when a person tried to talk to you when you were in that condition? Did you find yourself saying things that you didn't even mean? Although the example given of ice cream yesterday may seem quite trite, it's often those "silly" things that can lead one to getting angry. Imagine that you're finally on that bus you've been waiting for and you're already on a slow simmer. The friend that you were planning to meet calls you up and asks what's going on. When you tell them, they try to reason with you and explain that your presence is needed urgently. By now, however, you're so sold on the fact that you need ice cream right away, that nothing can convince you otherwise.

Step 6 - bewilderment of memory: In such a state of mind, the memory gets bewildered. Memories are repositories or storehouses of past events and experiences. The memory could remind you that obtaining ice cream is not a life or death situation, but if attachment firmly takes hold, it's to no avail. It's not possible to bring back the "memories" of living peacefully without ice cream. Everything gets fuzzy and out of focus...which leads to...

Step 8 - falling into the material pool: Any chance of acting with gratitude and compassion is now completely out of the question. The attitude of "it's all about me" firmly takes root. This only further propagates our illusion that we are this body and distances us from our true selves - the soul which is eternal, full of knowledge and bliss.

And that, my dear readers, is the attachment trap. It starts off so simply doesn't it? Just contemplating something, someone, someplace etc. No one would ever think that it could lead to this dark and dangerous road...but it can. So for all of you who are interested in working without attachment and reducing the amount of suffering in your life...it's something to consider. After all, once you know the inner workings of the trap, it's so much easier to avoid it.