the sage and the king 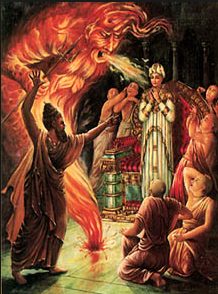 Verse 2.61: One who restrains his senses, keeping them under full control, and fixes his consciousness upon Me, is known as a man of steady intelligence.

Once there was a great sage by the name of Durvasa. He was a great lover of God and would travel near and far visiting various kingdoms and cities. In his travels, he once visited a king by the name of Ambarish. Ambarish was not only a great king who was beloved by his people, but an incredible role model. He exemplified what it meant to lead by example and although having all riches and opulence at his disposal, his greatest source of joy was in practicing bhakti yoga.

Ambarish would observe all festivals and auspicious occurrences which sometimes consisted of fasting. The purpose behind such fasting was to utilize that time, which was normally spent in eating, in increasing one's spiritual practices. Those practices that remind one of their spiritual connection with the Supreme such as mantra meditation, reading bhakti texts and hearing from advanced bhakti practitioners. Just when the time came to break the fast, the sage Durvasa came to visit.

Ambarish received Durvasa and his students with great happiness. With sincere hospitality, the king offered the sage and his students food which had been cooked and offered to the Supreme with great love and affection (in sanskirt this is known as prasadam). Durvasa accepted but expressed the desire to bathe first since he was coming from travelling. When Durvasa left, the king was informed by his ministers that the time to break the fasting period had come. Ambarish, being the best of hosts, expressed his discomfort and stated that, "It is the duty of the host to ensure that their guest has eaten to their full satisfaction before entertaining any thought of eating themselves."

His learned bhakti ministers, understanding that it was important for the King to break fast, suggested that he take a drop of water. This would count as breaking the fast, but at the same time since it was not a foodstuff, would technically mean that the king was still honouring the etiquette of serving his guest first. On the suggestion of his elders, Ambarish took a drop of water and waited patiently to personally serve the sage his meal.

Durvasa, who was in possession of great mystical power, immediately realized what the King had done and took offense. Hurtling insults at the king and saying that the Ambarish had no sense control, the sage invoked a great demon by the power of mantras to kill the king. All the while, Ambarish simply remained calm. Remaining composed, he prayed to the Supreme, "If you want to kill me or protect me, please do so as your will is my will."

This demonstrates such a valuable and important lesson for all of us - aspiring to become a true practitioner of yoga and learning how to accept any situation with gratitude and dependence on the Supreme is not restricted to a select few. It wouldn't be surprising for one to normally consider a sage to be a greater bhakti yogi than a king, but here we observe an example of what could arguably be the opposite.

As has been mentioned several times - it's about a transformation of consciousness, not an artificial repression of the senses. When one's consciousness is filled with gratitude and longing to reconnect with the Supreme, who has given us all individual and special gifts, then the natural inclination is to utilize all we have (i.e. our senses) in bringing pleasure to the Supreme.

Interested to know how the story ends? Let me know in the comments!