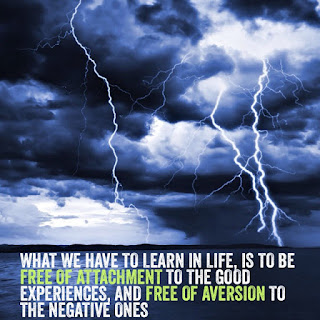 On any path one follows, there are challenges and obstacles. Identifying these challenges is a key step to becoming successful in any endeavor we choose to pursue.

Now I don't know about you, but I've always felt that life should come with an instruction manual. That manual would contain clear guidelines as to how we can lead happy lives; as well, it would include a listing of all the unexpected trials, tribulations, twists and turns we are to encounter.

Imagine my surprise when I first read the Gita - I had found it! My guidebook for life! Within its pages, the Gita speaks at length as to how we can become happy. Equally important, it warns us of the problems we may face as living souls inhabiting a temporary body.

Now the Gita doesn't get into specifics...although sometimes it certainly does seem like it's been written specifically for me! Instead, it does one better.

The Gita empowers an individual.

For most of us, our issue is that we tend to look outside instead of looking in. In other words, we think we are so many "external" things - I am male, female, my mind, my body, my intelligence, my senses etc etc... We neglect who we really are- the soul.

In order to successfully live a happy life, we need to become cognizant of those things that can prevent us from achieving the goal of self-realization. After all, if we don't know who we are, how can we relate to anything/anyone else properly? Two such obstacles are identified today - the senses and their objects.

In a previous post we spoke at length discriminating between regulating and repressing one's senses. In concluding that topic, this perspective was offered:

That being said...it doesn't just end there. See it's not just about the senses and their objects, it's how we relate to them. As today's verse describes, we can essentially categorize our interaction with them via these two adjectives - attachment and aversion.

Now, as many of you might have noticed, the Gita doesn't give everything away all at once. It slowly builds on points so that we get an opportunity to digest it all.

From the senses and sense objects that we can perceive and easily relate to, we now are moving on to a more subtle sphere. After all, it's easier to control our hands, tongue, ears, eyes and nose, but it's much harder to control whether we become attached to or averse of something.

That takes more than just knowledge. Knowledge may help us in practicing regulation, but it is only realization that can release us from the control of these two characteristics.

And what is that realization? That we are not this body. After all - attachment and aversion arises as a result of how something, someone or a situation affects or interacts with the body. It has nothing to do with the soul which is eternal and spiritual.
Posted by Unknown at 6/25/2013 01:49:00 PM