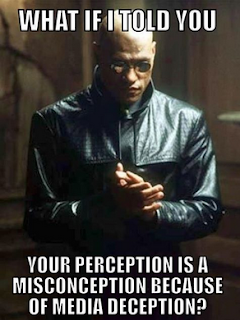 Verse 3.29: Bewildered by the modes of material nature, the ignorant fully engage themselves in material activities and become attached. But the wise should not unsettle them, although these duties are inferior due to the performers' lack of knowledge.

Have you ever wondered what it would be like to be under a spell? If you haven't realized it yet, it might come as a shock. Most of us are living under one!

We are under the spell of the three modes of material nature.

These modes, otherwise known as influences or qualities, affect us all the time. Our moods, our activities, our choice in music, food, association - you name it and we're influenced.

So why is it that we are influenced by the characteristics of goodness, passion and ignorance? In Chapter 14 of the Gita, Krsna will explain this in greater depth. The answer is simple though - it's because most of us identify ourselves with the body. Since we identify with the material and temporary body, we are influenced by the material and temporary modes of material nature.

There is good news however: it's a breakable spell!

The secret to breaking the spell has already been elucidated, but it's worth mentioning again. The spell of these three material qualities is powerless the moment we start to realize that we are eternal souls. Material influences are no match for the eternal.

If you're thinking "Easier said than done!" you're right. Well...at least partially. ;) After all, after lifetimes of identifying with the material, a paradigm shift is now required. After focusing on the external for so long, trying to reconcile the truth that happiness truly lies within can be difficult.

It is difficult, nearly impossible for one to realize and act as a soul...that is, if you try to do it yourself.

That's why the practices of bhakti yoga are cultivated and done in the company of other aspiring bhakti yogis. Whether it be kirtan (mantra meditation to music), reading the bhakti texts, eating food offered in love to the Divine or praying - it's done together because there is power in numbers.

It also serves as a great help when our minds start flipping out on us. We have friends and well-wishers who gently remind us that we're under a spell and encourage us by their own example how to get out.

To fight the spell of the three modes of material nature we need all the help we can get. All the facility is out there...the question remains - are you ready to wake up from the spell?