if everyone was the same...it would be so boring! 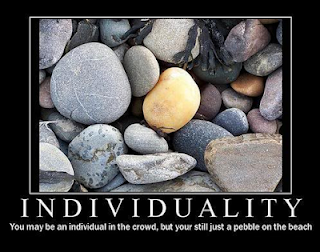 Verse 3.33: Even a man of knowledge acts according to his own nature, for everyone follows the nature he has acquired from the three modes. What can repression accomplish?

Why bother fooling yourself? It's a question I've asked myself a lot. We all have our nature and working with our tendencies and proclivities is so much easier than always trying to fight against them.

Yoga is all about personalism. There's none of this "Oh...I wish I was someone else!" Sure, we might aspire to follow in the footsteps of others so we too can also gain realization, knowledge and skills - but that's it. There's no merging or becoming someone else!

After all...where's the fun in that? If everyone was exactly the same, it would be so boring...

In fact, this reminds me of a story that one of my role models, Radhanath Swami, once narrated and which I would like to share with you here. If you've never read his story of how he came to bhakti yoga, I highly recommend it. He's written a book called The Journey Home.

Once, he was giving a talk on bhakti yoga to bunch of students at a University. At the end of the talk he opened it up for questions and one student stood up and obnoxiously said, "That's all well and good you speak of bhakti yoga. But if all of us were renounced monks like yourself then how would this world run?" Smirking, he sat back down to the applause of his fellow classmates. Radhanath Swami asked this boy, "What are you studying to become?" The boy stated he was to be an accountant. Always witty, full of good humour and no malice, the Swami replied "Well....what would happen if the world was full of accountants like yourself?" To this, the audience roared with laughter. Radhanath Swami concluded by saying that everyone is needed whether they be monks, accountants, businessmen etc...

The point of the story is this - we are all individuals. The soul, although a part and parcel of the Supreme, is also separate. Just like a drop of water has the properties and consistency of the ocean, similarly we too possess divine characteristics, but in a limited amount.

As one bhakti yogi put it:

Bhakti yoga is about discovering your personality as lover of God.

I can't tell you how relieved I felt upon hearing that. Although we may face challenges and strive for personal improvement, it's not at the cost of losing our personality.

There's no one like you in this world...it's true. In fact, it's confirmed here. There's no need to repress our nature; instead we transform it so that we can do the most good with it.

So the next time you find yourself comparing yourself to others, just remember: we are all like diamonds in the rough. We just need some polishing and bhakti yoga is the process by which we can discover who we really are and shine.

Email ThisBlogThis!Share to TwitterShare to FacebookShare to Pinterest
Labels: bhakti, bhakti yoga, if everyone was the same...it would be so boring!, individual, personalism, personality, Radhanath Swami, The Journey Home, Verse 3.33, yoga