the cure for lamentation 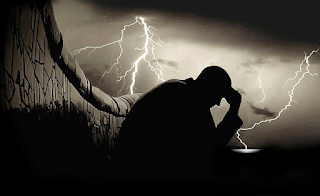 Everything in the material world has a beginning, middle and an end. Whether it be life, relationships, career, hobbies, hunger, happiness...everything. However, instead of understanding this truth (which we all have first hand experience of), we still are so surprised every time it happens to us.

It reminds me of an incident that takes place in the Mahabharata. As was mentioned in earlier posts, Arjuna is one of five brothers who collectively were called the Pandavas of whom Yudhisthira was the eldest.

At one point in time, the Pandavas princes were exiled to the forest for thirteen years. Humbly, they accepted their fate. Despite being banished to the forest, they still helped anyone that they could. One day, a sage asked them for their help to get back some special sticks that a deer had taken by mistake. Searching and searching for the deer without success, the five brothers became tired and were overwhelmed with thirst.

Yudhisthira, noting their sunken spirits and need for water, asked the youngest of his brothers to search for a nearby lake. Spotting one, the younger brother went to the lake and cupping his palms brought some water up to his lips to drink. At that time, a voice suddenly spoke saying "Stop! This is my lake. You cannot take water without my permission or else you will die." Paying no heed to this warning, the young prince drank the water and fell down dead.

Some time passed and when their youngest brother did not return, Yudhisthira sent another of his brothers to find out what happened. Another brother went and the same incident occurred. Over and over this happened until Yudhisthira was left alone and went searching to find out what happened to his brothers. When he saw his brothers all lying lifeless by this lake, Yudhisthira was overwhelmed with grief and left wondering how anyone could harm them. When he too went to drink some water, the same voice issued the same warning and told Yudhisthira that the reason why his brothers were dead was due to the fact that they had drunk the water without this person's permission.

Yudhisthira was compassion and righteousness personified. Despite the fact that he heard that this voice revealing that they were indirectly responsible for his brothers' death, he immediately complied and asked what this person wanted. Revealing himself, this guardian of the lake asked him to answer a series of questions. One of those questions was "What is the most wondrous thing?" Yudhisthira's answer always amazes me even though I've heard and related this story for years. Yudhisthira said, "The most wonderful thing is that although everyday innumerable humans and their animals go to the abode of death, still a man thinks he is immortal."

This story, or at least this part of the story, always makes me reflect on how surprised we are when something finishes or ends. We all pride ourselves on being intelligent persons, right?. If we are intelligent, then why are we so surprised that anything that is initiated or born will eventually terminate and end? Pragmatically speaking, there is no need for lamentation.

So why do we lament? Having read the Bhagavad gita, I can only come to one conclusion. The soul is eternal and is never subject to birth or death. That is who we really are. Therefore, when we encounter the temporariness of the material world in all its facets, it feels artificial and doesn't sit right with us. Since we don't know what to do or how to get out of this cycle of "beginning, middle and end", we lament.

That's why bhakti is so important. It teaches us the way out. It opens our eyes to the brilliant truth - we are eternal and therefore we should only seek out those things that are eternal since that is what will make us truly happy. And what is it that is eternal? God and our relationship with him.

That's why bhakti is the cure for all lamentation.