a story about birds...with a side dish of karma yoga! 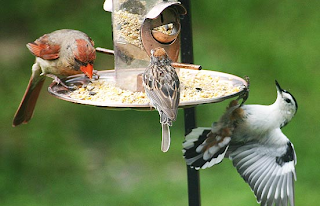 Verse 3.4: Not by merely abstaining from work can one achieve freedom from reaction, nor by renunciation alone can one attain perfection.

Today I had a dear blogger friend come to me for some advice. Although I was doubtful that I could be of any help, I asked her to present her challenge and listened with an attentive ear. My friend is an avid birdwatcher and has been creating areas in her yard where birds can come to hang out. Isn't that cool?! In helping to facilitate this ideal setting for her winged friends, she has set up feeders in different areas.

Problem is, an unexpected side effect has started to manifest in the form of rodents who are now also coming to call this area home. As she explained the situation, she informed me, "I don't have any problems with mice or rats per se, I'm just concerned with them being so close to the house." She continued on asking, "Would it be wrong to introduce an animal, say a cat, to take care of this?"

The very fact that she was concerned about potentially bringing in something to help rid the area of these pests speaks volumes. I can't say how impressed I was. Some of us probably wouldn't even think twice when trying to get rid of a pest, what to speak of rodents. Finishing her tale, she asked me, "What would the Gita say?"

I have to admit....I was TOTALLY stumped! On one hand, the Gita informs us that all living creatures have souls and therefore they should all be respected equally, irregardless of the body they are presently found in. On the other side, rodents near homes is never a good thing for obvious health and safety reasons.

How does that have anything to do with today's verse? There are quite a few parallels, if you ask me. It demonstrates very practically that by merely abstaining from work one cannot achieve freedom from reaction. That is, if my friend does nothing, the rodent population might increase and she might have a serious situation on her hands. Similarly, if she were to just "renounce" her project of creating this beautiful area for the birds, that probably won't sit right with her either. Her desire to help the birds won't leave and instead she'll be left feeling unfulfilled.

I honestly can take no credit for coming up with the option which I proposed because we just kind of stumbled into it! In talking, I just happened to ask my friend whether her feeders were close to the house to which she replied yes. So I suggested that she move them further into the yard and away from the house (that way if the rodents did get into them, they too would have to move away from the house). She liked the response! In fact she said, "That never occurred to me, probably because I like watching the the action at the feeder from my window."

Now, that doesn't mean that the challenge is solved, but it does present an option which can be tested.

Similarly, when we face times in our lives when we don't want to or don't know how to go about doing the needful, this verse is a handy one to come back to. Karma, as most of us know, means that for every action there is a reaction. Sometimes, newcomers to yoga think that the only way to not receive a reaction is to remain inactive. I'm afraid that's not the case....even inactivity can result in action which we'll discuss soon enough. Try that one on for size!

Receiving "no karma" or akarma is the desired goal for those who want to practice karma yoga. Key to performing akarmic actions is to perform the activity without being attached to the result. As was discussed in Chapter 2, Verse 2.48 - it's all a matter of consciousness.

So remember, yoga isn't about artificially renouncing something or abstaining from work - it's about working intelligently in a spirit of gratitude.