feeling confused? you're not alone... 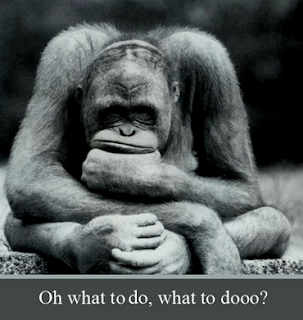 Verse 3.2: My intelligence is bewildered by Your equivocal instructions. Therefore, please tell me decisively which will be most beneficial for me.

For all of you who have ever tried to read the Gita and have given up because you've just found it confusing, I dedicate today's post to you!

I've spoken to innumerable persons over the years who have expressed so much interest in reading the Gita. They've heard incredible things about it, seen positive transformations in the lives of friends and loved one's who have applied the teachings of the Gita in their own lives and have been just so excited upon receiving their own copy. Making the time to sit down and read it, they've opened up the book and with anticipation in their hearts, they started reading the first few verses.

"Here in this army are many heroic bowmen equal in fighting to Bhīma and Arjuna: great fighters like Yuyudhāna, Virāṭa and Drupada." Verse 1.4

...that a small wrinkle starts to appear in some peoples' foreheads. Some start thinking, "What? What are these names? I can barely read them what to speak of pronounce them." That anticipation and excitement that first accompanied the opening of the book is now fading fast and for some, this is where their foray into the Gita ends.

For others, they journey on and as they continue to read Chapters 1 and 2, some are not quite sure if they really understand what's going on. Perhaps you yourself may have pondered along the lines of, "What exactly is Krsna saying? What is this book really about? I thought it was about yoga and karma and becoming a good person. I thought it was practical, but all I'm experiencing is confusion. What gives?"

Have you ever felt like this? If so...you're not alone. Arjuna, who is not only Krsna's friend but an incredibly intelligent yogi, is also feeling totally confused.

So what's the take away? Feeling confused is ok. It's normal.

Although this analogy may seem totally far-fetched, I kind of think of it like this. Have you ever seen Titanic? No, this isn't a trick question, I'm actually asking if you've seen the multi-billion blockbuster movie Titanic. I'm guessing that the vast majority are probably nodding their heads (even if it's in embarrassment!). Now, I don't know about you, but when the movie first started, I honestly felt like I was in the wrong theatre.

[Spoiler alert in case you haven't seen the movie] In the first half hour of the movie all you see is an old woman and some deep sea shots of a ship in the water. I remember feeling totally confused and turning to my friend asking, "Are we in the right theatre? I thought Leonardo DiCaprio was in this movie?!"

It was only a little later that things started to finally make sense...but it took some time. I finally realized that they were establishing the back story in order to place the movie into context.

However, for most of us, like Arjuna, that just leaves us feeling confused! Of course, for some, everything might just click which is wonderful. But...that's for some. For the majority of us, we are just left going "Huh?" We may understand a few points like the fact that Krsna is saying that we are the soul and that attachment can be problematic. You know what? If that's all you got out of the Second Chapter, good for you! That's a great foundation to start on.

It's now in Chapter 3 that Krsna is going to systematically break the process of bhakti and karma down into digestible bits. He's going to give us a step by step process as to why one should perform work according to one's nature in a spirit of detachment instead of running away to the forest to meditate.

So, if you ever gave up on the Gita, take heart. Even Arjuna, one of the greatest yogis of all time, was confused. The Gita is life transforming and extremely practical but it takes some time. We invite you to join (or re-join!) us as we start getting into the heart of the Gita!
Posted by Unknown at 5/06/2013 11:35:00 AM