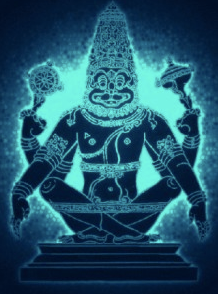 Verse 4.8: To deliver the pious and to annihilate the miscreants, as well as to reestablish the principles of religion, I Myself appear, millennium after millennium.

Krsna is saying here, that He comes to deliver the pious and annihilate the miscreants. Those are some strong words and their meaning could very easily be misinterpreted to mean that the Divine which the bhakti texts speak of is not very compassionate. Nothing could actually be further from the truth.

This verse demonstrates exactly how loving and protective the Divine actually is.

To really understand what this verse means, it's important to understand what the words "pious" and "miscreants" mean as per the Gita. The pious, are those that are trying to live by the principles of humility, compassion, cleanliness, and truthfulness. They see everyone as spiritual sparks, worthy of their respect and try to live their lives as spiritual warriors who are empowered by grace. The miscreants, simply put, are those who try to destroy and hurt those who are trying to be pious.

I'd like to share a beautiful story that illustrates this point. In the great bhakti text known as the Srimad Bhagavatam, the life of a young bhakti yogi is described. At the tender age of five, a prince known as Prahalad became a great lover of the Divine. Despite his young age, he was greatly learned and shared his knowledge of bhakti yoga with his friends. However, Prahalad's father was, quite simply put, a terror. Thinking himself to be God, Prahalad's father (who was the king) would torture anyone who would say otherwise.

In fact, his father was so power mad and deluded that he actually started despising his own son since Prahalad accepted him to be his father, not God. Prahalad was continuously tortured in different ways such as being thrown off a cliff, into a pit of poisonous snakes, and was even fed poison. Every time though, by the grace of the actual Supreme, he was saved. This infuriated his father to no end.

Throughout all these trying times, Prahalad kept his calm and his faith never wavered. Can you imagine? Despite being exposed to such horrendous treatment, from his father no less, Prahalad never wished him any ill will. After so many failed attempts at killing his own son, his father demanded from him "Where is this Supreme you speak of? Is he in this pillar?" To this, his sweet son Prahalad replied, "Of course, the Divine is in everything." When his father rushed at the pillar with a weapon to break it, the Divine appeared and saved Prahalad once again.

I love this story since it illustrates just how personal and loving the Divine actually is. It also explains why He appears millennium after millennium. The Divine doesn't have to come personally to take care of trouble-makers, but he actually does so just to interact with those who are trying to love him. In fact, that's why the words "to deliver the pious" come first in this verse since it highlights what's dear to the heart of the Supreme.

That's how protective, loving and personal the Supreme actually is. So the next time you feel lonely or stressed, just remember: protection and care are just a mantra away.
Posted by Unknown at 8/01/2013 09:39:00 PM