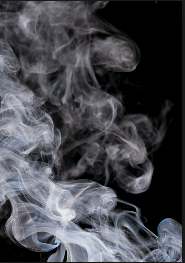 I love analogies. A good one is able to simplify concepts that are complicated or foreign by making them understandable and relatable.

Yesterday we were introduced to what bhakti yoga defines as lust - a negative transformation of love. While love is selfless and giving, lust is selfish and greedy. The soul's true nature is one of love, but when the soul is covered by different degrees of lust, that lust acts as a covering which prevents the soul from understanding its true nature.

Today, through the power of analogy, we dive deeper into understanding how there are three degrees by which a living entity (i.e. soul) can be covered by lust.

The first example of fire covered by smoke relates to all of us who are living in human bodies. The bhakti texts describe that human life is one of responsibility. Whereas plants and animals are not subject to the laws of karma, human beings are. The reason why is due to the fact that we have the power of discrimination. This discrimination allows us to introspect and question who we are, why we are here, where we came from and do something about it!

This is not to say that those of us in human bodies are better than plants or animals...after all there are souls inside those bodies as well! It's to note and remember that the gift of discrimination is part of the human body experience.

When this discrimination is used to question "Who am I?", the soul can embark on a journey of self-discovery. Just like smoke may prevent us from seeing the fire which is producing it, clearing the smoke reveals its source. Similarly, the soul which can be compared to the fire, is driving the body. When we start turning our attention to it, we start to recognize that is who we really are.

The second analogy of a mirror covered by dust refers to birds and beasts. Dust is heavier than smoke and can be harder to clear. Similarly, for those souls that are in the bodies of birds and beasts, the covering of lust is greater and therefore it is harder to achieve self-realization.

Finally, the third analogy of the embryo being covered by the womb refers to the densest covering of lust over a soul. Such souls that are so heavily covered that they inhabit the bodies of plants.

So why does the Gita go into so much detail? To highlight how lucky we are to be in a human body! It gives us the facility to achieve self-realization much more easily and to help others as well. We can help our fellow souls in the bodies of birds, beasts and plants very easily - by exposing them to the power of mantra meditation and prayer.

That's right! Practicing mantra meditation, like uttering the most powerful maha mantra, in the presence of other living beings can help remove the dense covering of lust.