are you aware of what's going on? 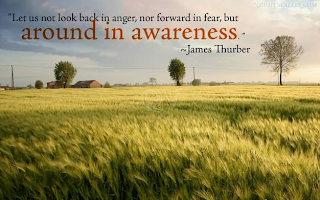 Verse 3.43: Thus knowing oneself to be transcendental to the material senses, mind and intelligence, O mighty-armed Arjuna, one should steady the mind by deliberate spiritual intelligence [Kṛṣṇa consciousness] and thus — by spiritual strength — conquer this insatiable enemy known as lust.

Once in awhile I am startled by how unaware I am of everything going on around me. At such times, I realize that I'm functioning on automatic pilot and have to remind myself that I'm not a robot but a sentient being that has the power to observe and discriminate!

One such moment happened to a friend of mine recently. She was mentioning how she became jealous upon hearing good news of someone who is close to her. It's not that she didn't wish well for the individual, as she later remarked to me, but it was the fact that she wasn't the recipient of that good fortune. She's gotten over it now and having introspected a bit, said to me, "I wasn't aware that I could become jealous like that!"

I was struck by that phrase:

This entire 3rd Chapter of the Gita has been encouraging us to become more "aware'. It's been pointing out that we, as embodied souls, are prone to being influenced by lust and the mentality of having things go our way (i.e. being attached to the fruits of our work). Krsna has taken the time to stress the importance of awareness because...

It's only when we are aware of a lack, need or challenge that we are inspired to do something about it.

This awareness is so crucial and necessary to the practice of bhakti yoga. In fact, often when I'm asked what bhakti yoga is all about, I give a standard answer - "It's the process by which we can connect to ourselves, the Divine and one another through love and service."

However, as my own understanding of bhakti is deepening, I'm starting to include an additional line in my explanation:

Bhakti yoga is also about becoming conscious of who we are and our eternal relationship with all living entities.

After all, if we don't know who we are and what our relationship is with one another, then it becomes irrelevant as to why we should want to connect to anyone through love and service. As the great bhakti yogi, Srila Prabhupada, said, "First be conscious; then become God conscious."

Isn't that just so practical and beautiful? Ultimately, this means realizing that we are eternal souls who have nothing to do with this temporary material world. This is just one stop in our journey and like an actor in a drama, the body we are in, the situations we face and the emotions we feel are just part of one scene in that drama.

When we become aware that we are not the body, but the eternal soul, it is only then we'll stop sweating the small stuff. Things will start to fall in the proper perspective and we'll be well on our path to lasting happiness.
Posted by Unknown at 7/11/2013 02:24:00 PM